This represents a huge update to HammerHelm and the first time the game really looks and plays how I’ve always wanted it to look and play. I’m ready to say it’s in a “playable Alpha” state, so I’m calling this Alpha 1. It’s not “done” yet, but this is the closest it has ever been. I can finally see the light at the end of the tunnel! These are really big changes, both to the graphics and the gameplay.

Screenshots at the bottom of this update if you don’t want to read the wall of text below.

Some highlights, but doesn’t include everything:

1. Complete Redesign of the Town
The buildings have been redone with new assets, are less cartoony, are to scale, and have actual interiors. You don’t zone into a new area when you go inside a building like before, you just open the door and walk inside. I’m really happy with how this turned out as even many AAA RPGs don’t support that. Note the new buildings are higher poly so performance is a concern, I’m still working on optimizations, LODs, Occlusion, etc. I think the buildings match the overall aesthetic and hand-painted look that I’ve been trying to achieve with the other assets and textures. The style of buildings is how I’ve always wanted HammerHelm to look (the original buildings were never meant to be final) so I really hope people like the change.

2. Overhaul and Update to Town Building
Added a couple of new buildings to support new gameplay (Infirmary and Barracks) but more importantly, redid the balance for unlocking the ability to place buildings and the resources needed to place them. I might redo the building crafting UI to show more of a tech-tree setup rather than just a list but leaving the UI as is for now. The new buildings are placeable but not all of them function yet.

3. Overhaul and Update to NPCs
Townspeople now correctly consume food and use up their tools. Crafters and Farmers replenish tools and food. Crafters will eventually be able to make better tools as the player finds more valuable crafting resources but that’s not in yet. Also updated which player used items are crafted by NPCs so the Crafters are more important and make more sense. Prior to this a lot of the NPCs didn’t really have a purpose.

4. Moods:
Townspeople have moods that are affected by things like whether they ate, working without a tool, whether their house is fully furnished (more on that later), if monsters are nearby, and a host of other things. Low mood results in working/crafting slower and/or higher costs for crafted player items. Low mood will eventually also keep you from expanding the town until you have improved things. If the player dies all of the NPCs get a reduction in mood. This reduction is higher if the player death occurs in the town during a town attack (see below) or other town event. This basically serves as the death penalty in the game. Townspeople display stars over their heads indicating their overall mood. You can also view the specifics of each NPC’s mood by pressing shift-V to bring up the Townspeople menu and mousing over each NPC. Some moods last until the problem is fixed (such as monsters being nearby need to be killed) and some last for a set amount of time (such as the player’s death).

5. NPC Crafters for Both Player and Townspeople
In addition to the original Crafters like the Armorsmiths and Weaponsmiths where players can craft new weapons and equipment, Crafters also now make stuff for other townspeople. For example, when you place a new house, it starts out unfurnished. You need to have a Carpenter who then crafts the beds, tables, and chairs over time. These Crafters use the same resources you use to build new structures so it creates some interesting choices for the player as to what to focus on and prioritize.

6. Events System Update
Events are similar to quests except they are more passive. For example, a worker can get injured on the job or a miner can get sick or a harvest can be better or worse than usual. Unlike quests, where the player has to get directly involved (such as clearing out a dungeon or rescuing a kidnapped NPC), events are smaller than quests and require the town to be set up correctly to mitigate the event’s effects. So if a worker gets hurt, it may take a day or two (in game time) for him to recover resting at home, but if you have an Infirmary, it only takes a few hours. Note that the goal is to have every building have a benefit to the player and not just be an event mitigation device. So an Infirmary is also the place to craft high tier ingredients to use in making greater heal potions at the Alchemist in addition to healing NPCs faster. I don’t want too many town buildings to feel like filler. Sometimes an event can become a quest though, for example a Miner get’s sick and isn’t getting better, creating a quest for the player to find a rare resource and deliver it to the Alchemist to create a cure. Fleshing out all of the events is my next task.

7. Player Resource Collection
The player can now chop down trees and deliver the logs to the Storehouse for NPCs to use. Gives the player something to do if there are no active quests or they just want to take a break from combat. Doing this will eventually also increases the mood of the resource gathering laborers. Right now the player just uses their weapon to “attack’ the resource rather than needing an ax or pick. I’m probably going to leave that as is since player resource collecting isn’t a big part of the game so making them carrying a pick and other crafting items is kind of silly. I need to add the ability for the player to mine stone as well but I’m holding off as I’m debating changing the Mine as the location for Stone and creating a Quarry as a placeable structure. Collectible stone will probably be found randomly on the map as well.

8. Day Night Cycle Hooked into Events and Town
The new day/night cycle is now hooked up and being used to control a lot of the game. Events can occur at various times of day and night as well as NPCs doing routines like working, crafting, eating, etc. I also redid the town lights that I showed a long time ago, so the town lights up really nice in the evening. The day/night system can be used for a host of other things too. NPCs do not sleep however, as I find it annoying in RPGs to need to get or buy something from an NPC but have to wait until morning.

9. Potions
Prior to these updates the player slowly healed over time while outdoors. This has been removed. The only way to heal now is with healing potions (or dying, which restores full health but causes the big mood debuff). This makes potions and alchemy resources way more useful. Also added support for other potions such as cure, resist, and speed, but those aren’t in yet. The player will be able find potion resources in the wild, in caves, and as loot but right now you only get them from Mushroom Men in the mines and caves. 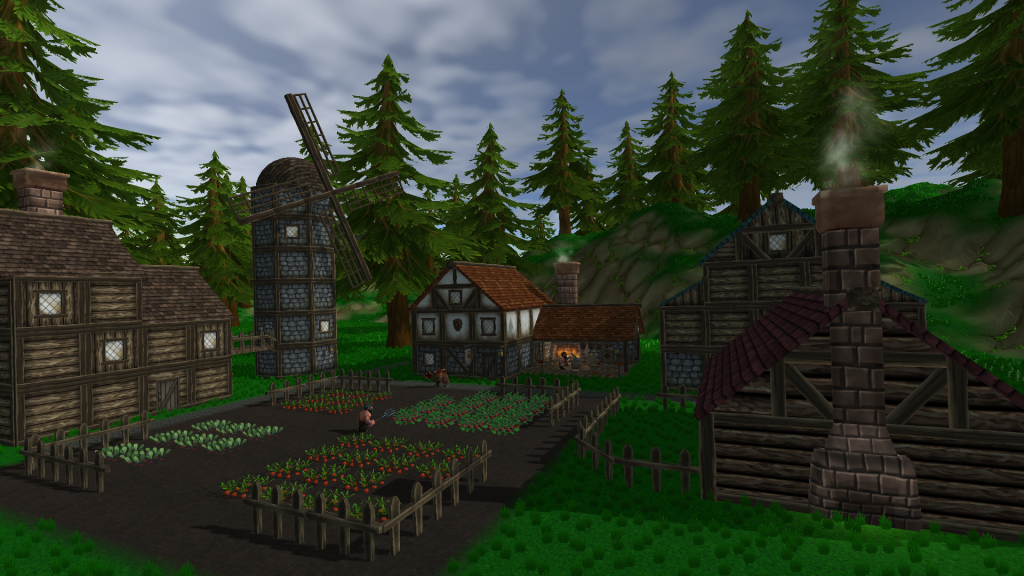 Sunrise in The Forest 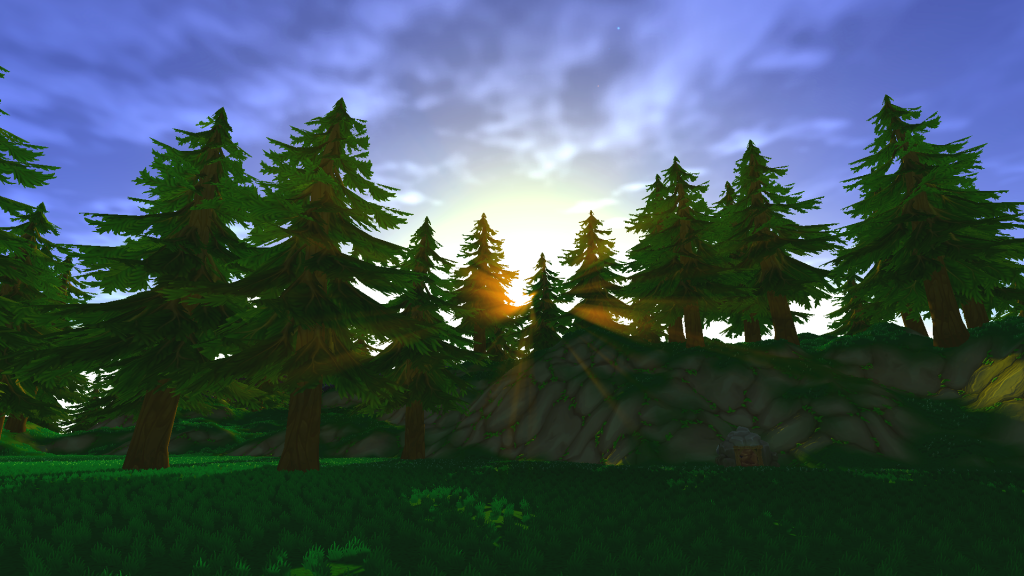 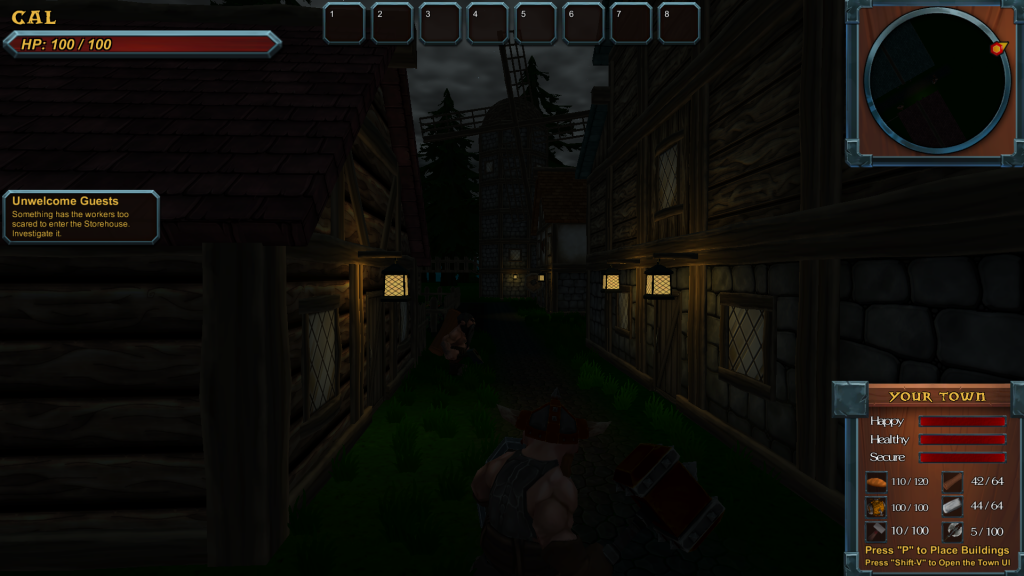 Interior of Tavern (work in progress) 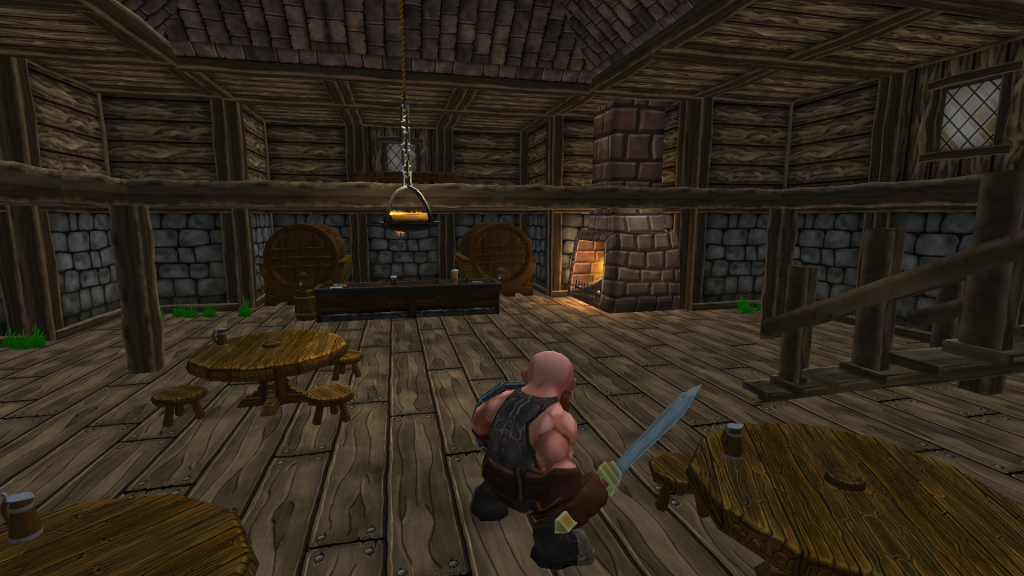 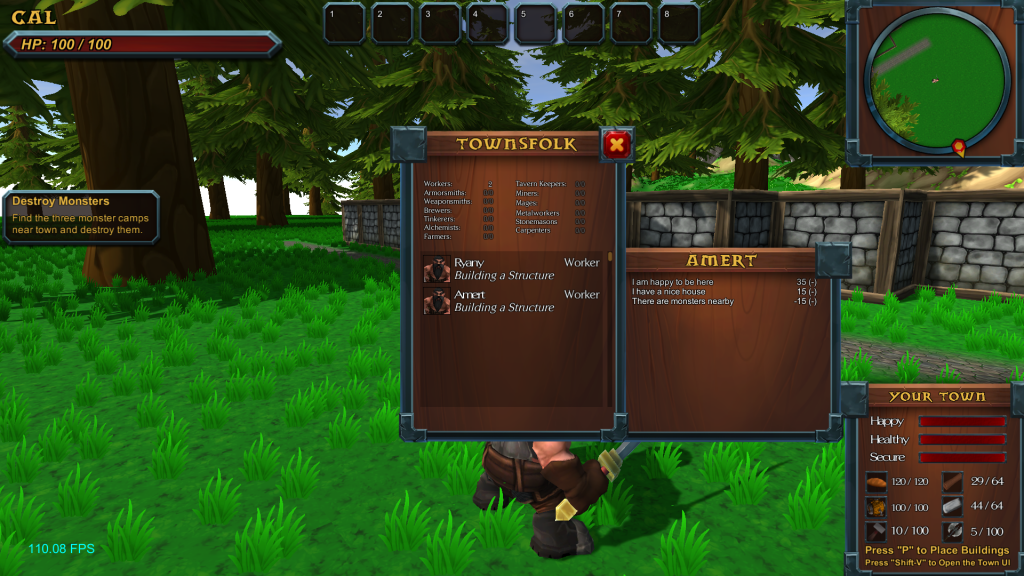